Aquarium Cleaner Fish. We tend to believe that they are not important but nothing is further from the truth. Far from being secondary,  aquarium cleaner fish play a fundamental role in these small ecosystems. Not only do they help maintain your balance, but they also act as helpers to improve your health. However, let’s not get confused. The presence of aquarium cleaner fish is not a substitute for a good filtering system. Your job is to help clean the water, not take full charge of it.

Understanding this nuance will allow us to better understand why they are important. Aquarium cleaner fish do not eat the garbage that others generate. What they do is feed on the algae that form on the glass walls or even on the remains of food that settle to the bottom. Two aspects that, although we can have at bay with a specific anti-algae product or using more powerful aquarium filters, will never replace the natural power of fish.

And if its virtues were few reasons to have aquarium cleaner fish, there is one more to contemplate. In general, all of them are extremely exotic and striking. A perfect detail to further embellish an aquarium.

As we saw, these animals are responsible for two well-defined types of waste. But do not believe that just because they are aquarium cleaner fish, the same species is capable of killing algae and food debris. Interestingly, nature has given each type of cleaner fish qualities. Therefore, it is important to know that aquarium cleaner fish are classified into two types: those that remove algae and those that we call pool cleaners.

On the other hand, an important note. Although aquarium cleaner fish feed on algae or debris, this is not a substitute for having their own fish food. What’s more: we are talking about fish with very specific needs, either because of the type of diet or where they eat. For this reason, there is nothing like knowing in depth the characteristics of our fish to choose the right type of food for aquarium fish them.

Because that’s another: many of these fish are nocturnal. A compelling reason for us to feed them at night but also to provide them with spaces to shelter from daylight.

Let’s see which are the most common fish in the aquarium. And, what is more, important still, what are the characteristics of each one. Only by knowing them will we know which fish are suitable for the different types of aquariums that exist. 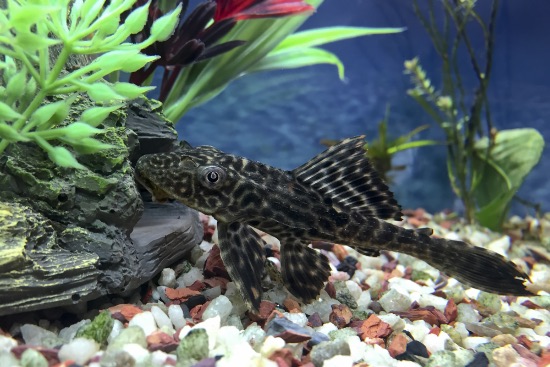 Popularly called locos,  Hypostomus Plecostomus is one of the most common species in aquariums. With an elongated body and drawn with dark stripes alternated with light ones, its beauty is undeniable. They come from marshy areas of northern South America and are used to living at the bottom of the aquarium. Despite being omnivores in nature, the largest percentage of their diet is vegetarian in nature. Since they are bottom dwellers, it is important to choose pelleted food for them that comes down quickly from the surface. Only then can we feed them correctly.

Known its virtues, let’s know a couple of aspects that without being inconvenient it is important to know. On the one hand, his character. In adulthood, the plecos is a territorial fish with those of the same species. Therefore, it is not recommended to have many individuals in an aquarium and, in addition, it is recommended that they have spaces in which to hide. On the other, you have to contemplate its growth. Although we usually introduce them into the aquarium with just five centimeters, they can grow up to 35. Something not very acceptable for an aquarium that is not good, very good! dimensions. 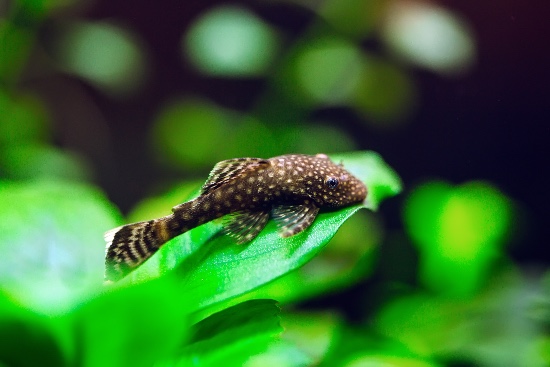 A perfect alternative to plecos for medium-sized or even small aquariums. We are talking about fish with a super striking drawing and a curious characteristic: the suction cup-shaped mouth. Inhabitants of rivers and swampy areas of South America, they adapt easily to aquarium life and do not usually grow beyond 10 centimeters. They are often confused with plecos and are even classified as “dwarf plecos” although they are different species. They are completely herbivorous, and also eat at the bottom of the aquarium.

They are also territorial in adulthood, only males and only with those of the same species. To avoid conflicts, it is not advisable to put more than one pair in the aquarium, or at most a trio. And, as with the plecos, it is essential that they have trunks for aquariums or amphorae. They not only serve them to protect themselves: they also allow them to mark their own territory. A detail that saves many coexistence problems.

And one more note about them: to properly digest, they need cellulose. That is why providing them with a log can be a good way to ensure their health.

2. Pool Cleaner Fish, The Other Allies of The Aquarium

Corydoras, The Aquarium Cleaner Fish That Take Their Work to Heart 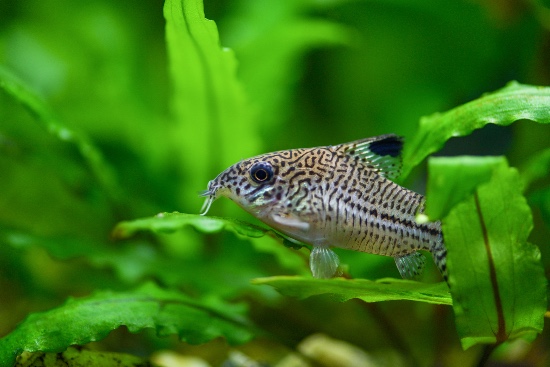 Identifying corydoras fish is simple: they are those that are constantly searching the substrate at the bottom of the aquarium. An unstoppable task that is, at the same time, an invaluable help for the correct health of the aquarium. We insist: this does not replace that we give them specific food for groundfish. Because, as much as they rummage through the remains, they demand to have their own diet.

We are talking about fish with a calm character, gregarious and skittish habits. For them to live in mental and physical balance, it is interesting to have at least half a dozen of them. 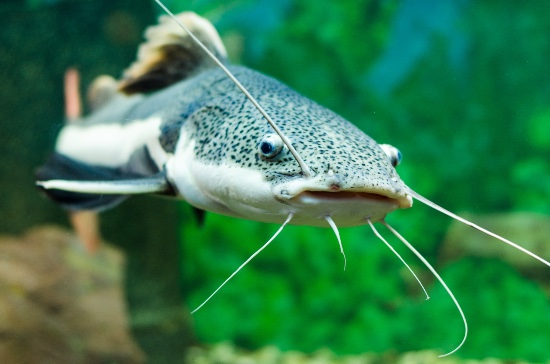 The nickname is not accidental: it is mainly due to the whiskers that characterize these aquarium cleaner fish. Far from what it may seem, they are sensory organs that allow them to detect food. But it is not the only peculiarity of this catalog of fish that includes about 3,000 species: in addition, it lacks scales. Instead, it has incredibly tough skin. And yes: it is as spectacular as it is unique.

Be careful because, among the 3,000 species, there are some that reach a good size. What’s more: depending on the variety of catfish, we can find some peculiarities when it comes to feeding or others. That is why there is nothing like knowing in depth the fish that we are going to include in our aquarium. The best way to be able to give you what you need, whether it is diet or space level.

And yes: aquarium cleaner fish is necessary. But, beyond this, another fact cannot be denied: it is difficult to give up its rare beauty in our little ecosystem.

Just when you think you’re ready to make a decision, you discover another pretty fish that tempts you into rethinking everything.

That’s why I have put together this blog to help you with the choices of our favourite colourful freshwater fish to help you out. I can help you with a wide range of fishes and their products, so there’s something for everyone!